Ideas for your holiday with children 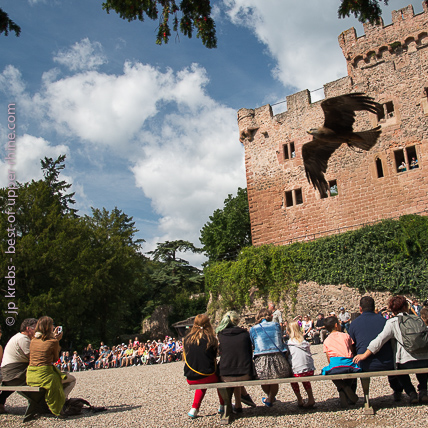 Acrobatics of raptors above the public are spectacular. 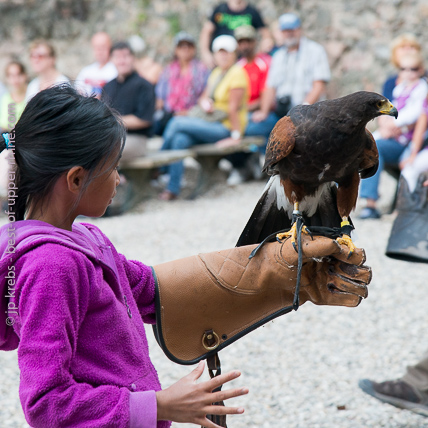 Children under the watchful eye of the falconer, are invited to an unforgettable moment!

For nearly 50 years the venerable ruins of the castle of Kintzheim on the slopes of Haut-Koenigsbourg became the sumptuous theater of the Eagle Park and its residents feathered. Every year from April to early November, the castle of Kintzheim becomes the kingdom of birds of prey, an eagle nest in the literal sense, the decor superb show.
The stars of the show are the birds. And what birds! A spectacular treat for young and old!

Eagle Park - Castle of Kintzheim 67600 Kintzheim - Alsace
The Eagle Park in Alsace gives visitors the unique opportunity to observe and admire in the sky, or near them, the most beautiful and largest raptors in the world, in an impressive show.
Click here to learn more and see the pictures on my blog.
The Eagle Park is open from early April to 11 November. For opening hours and shows, the access card, visit the website of the Eagle Park.
The castle of Haut-Koenigsbourg, an impressive fortress
The famous castle of Haut Koenigsbourg, the most visited website in Alsace and one of the first in France, is only twenty minutes from our Riquewihr holiday apartments. The Haut-Koenigsbourg emblematic of the Alsatian tourism and cultural heritage, is one of the finest examples of a mountain fortress.
When I was a kid, we went to the High Koenigsbourg school exit. It was always a romantic and magical day which filled our minds of children. The magic of the place continues to captivate today's children ... 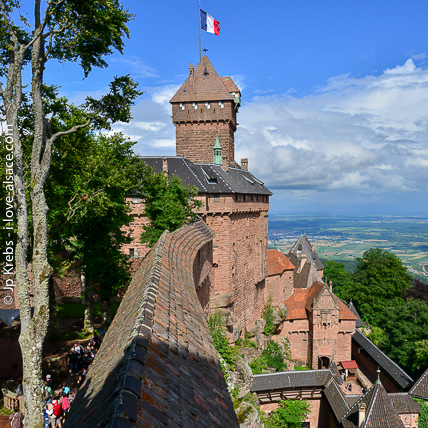 From the top of the impressive walls of the castle of Haut-Koenigsbourg, the view is spectacular: it shows all the plain of Alsace, the Black Forest and on a clear day, the Alps! 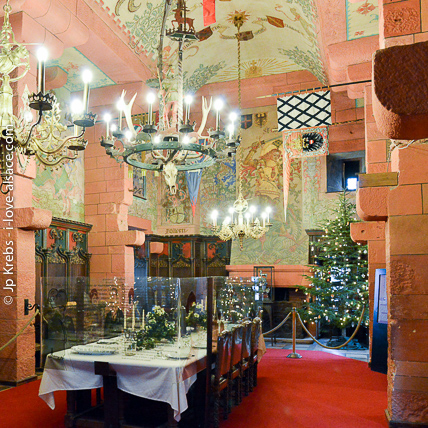 The interior of the castle is worth a long discovery. We recommend you to be accompanied by a guide who will amaze children and arouse their interest.

The Stork Park in Hunawihr, next to Riquewihr
Originally, the Storks Park was only a captive breeding site for the White Stork. The Stork Centre of Hunawihr was founded in 1976 in order to save the iconic stork of Alsace born. It is here that the creators of the Eagle Park in Kintzheim, managed to find a technique to "repopulate" Alsace ...
Today, the Reintroduction Center of the Stork is an animal park that has expanded to other endangered species such as the otter. It is also a recreation area, but above all a place where we become aware of threats to nature and the need to save. A visit not to be missed when visiting Alsace. Spring is particularly interesting because it is the season of storks.
See photos on my blog and the article "Stork, my beautiful queen of Alsace"

The Storks Park is open 7/7 from 25 March to 1 November 2016. For more information and schedules, visit the website of the reintroduction center of the stork in Hunawihr 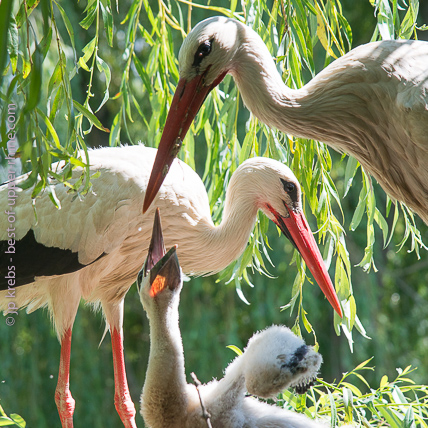 Spring, season of the baby storks, is a particularly interesting time to visit the park. 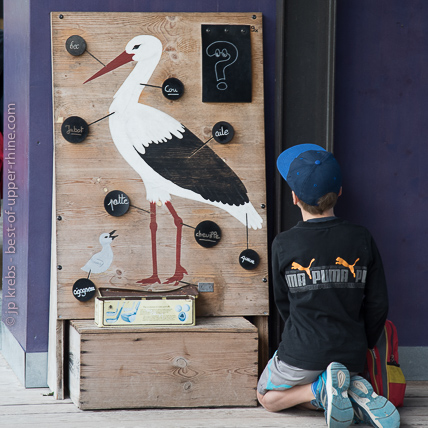 Many interactive and educational games enable children to become familiar with the stork, its environment and lifestyle.

Europa Park in near Germany, the theme park like no other ...
A 45-minute drive Riquewihr, just on the other side of the Rhine (so in Germany), the park Europa Park just celebrated its 40 years of existence.
Europa-Park is an amusement park, more precisely, a theme park and a German leisure resort in Rust, Baden-Württemberg, 45 kilometers from Colmar. In 2014, Europa-Park was the second European park in visitor numbers after the Disneyland Park, with some five million entries. This makes it the most visited seasonal park in the world.
The park has 55 attractions in 13 neighborhoods involved in a European country (hence its name).
Europa-Park was voted best amusement park in the world in 2014 and 2015. All information on site is available in French. 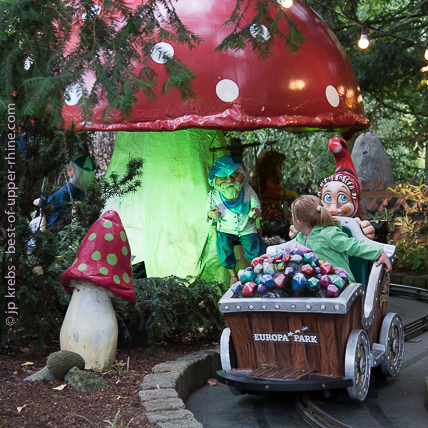 The enchanted forest, a paradise for toddlers ... 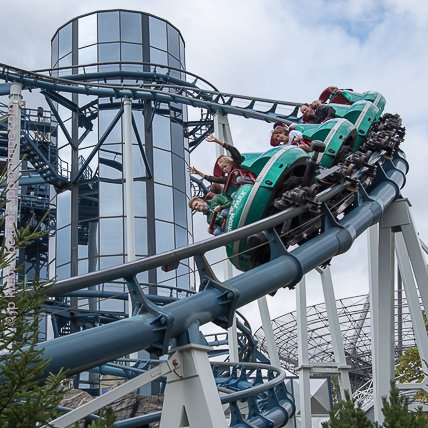 ... or the thrill rides for older children, a day at Europa Park will be unforgettable.

The National Automobile Museum presents the most beautiful collection of vintage cars in the world!
The Cité de l'Automobile - National Car Museum - Collection Schlumpf in Mulhouse is the largest automobile museum in the world, with 500 vehicles including 464 cars from 98 brands. It includes the famous collection of Fritz Schlumpf and traces the history of the European automobile from 1878 to the present. The museum, located in an old mill from 1880, includes more than four hundred parts classified as historical monuments!
This is the largest Bugatti collection in the world with two of the six famous Bugatti Royale Coupe Napoleon whose well as a large collection of Rolls Royce. 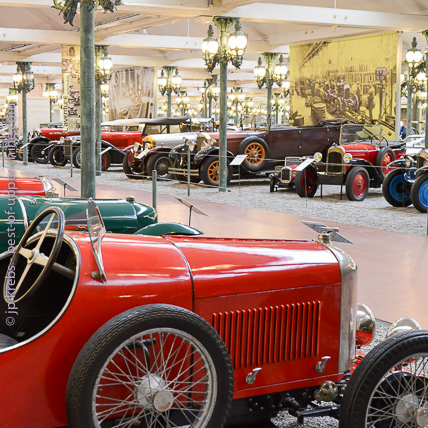 At the Automobile Museum, hundreds of wonderful cars from another age ... 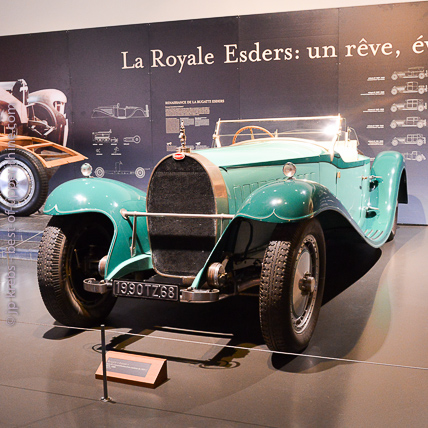 ... Dozens of prestigious limousines, which certainly include that of Arsene Lupin, who knows? are waiting for you to dream ...

Train City
The Cité du train (also called French Railway Museum) in Mulhouse is the largest railway museum in Europe!
The museum has the only and largest global collection of the history of French railways. It now houses 15 000 m² a collection of over a hundred vehicles and rail vehicles of all eras.
Plunged into semi-darkness, we discover locomotives and wagons in their reconstituted environment with mannequins that light up progressively of wanderings with luxury and those moments of misery especially during World War II.
The Train City is open daily, year round (except December 25)

Click to prepare your visit to the Train City - 2 rue Alfred de Glehn in Mulhouse
Combined tickets with the National Automobile Museum. A good idea is to visit one of the museums in the morning and one in the afternoon. A beautiful day ahead! 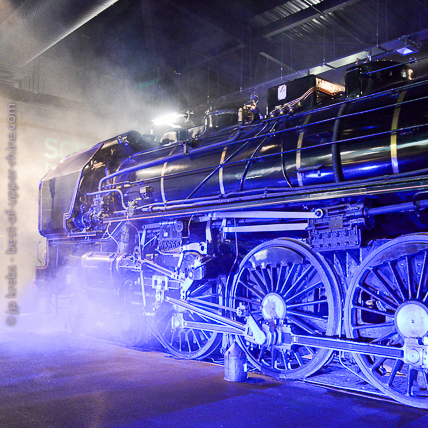 No no, at the Cité du Train, that are not models but the real steel monsters that have travelled on our railways for over a century that you can see and touch! 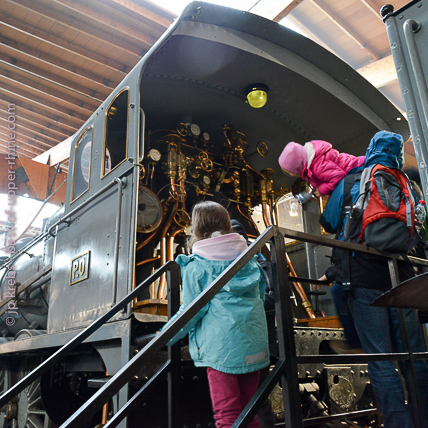 The whole family loves it and have a good time. Children, but also dad :-)

Alsace as it was in old times at the Alsace living museum
Here is another key attraction when visiting Alsace, especially with children. Alsace living museum (Ecomusée) in Ungersheim, between Mulhouse and Guebwiller is an outdoor museum were authentic Alsatian buildings were moved to and reassembled .
The Alsace Ecomuseum is therefore a real village. A village in Alsace as it could have existed in the early twentieth century with its streets, its gardens, its river ... With homes, farms, a school, a chapel, mills and artisan workshops ... and even a train station !
In these beautiful old buildings (some dating from the fifteenth century) and open to the public, costumed actors, some of whom are volunteers, present the traditional work of the region using ancient tools: blacksmith, wheelwright, cooper, sawyer, saddler, carpenter, baker ...

One of the beautiful old Alsatian farms at the living museum of Alsace.
Opened in 1984, the Ecomuseum of Alsace is the largest museum in France and is among the most prestigious in Europe. The village of the Ecomuseum of Alsace is a real "digest" of Alsace and its traditions. The museum's collections bring together almost 40 000 objects donated by the Alsatians: furniture, objects of everyday life, clothing, tools and agricultural machinery, dating from the mid-nineteenth century until the 1950s the 73 buildings that make up the village- museum are fully furnished and decorated with these donations. 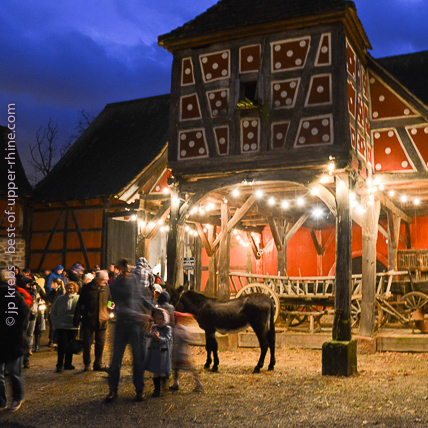 One of the oldest farms in the village 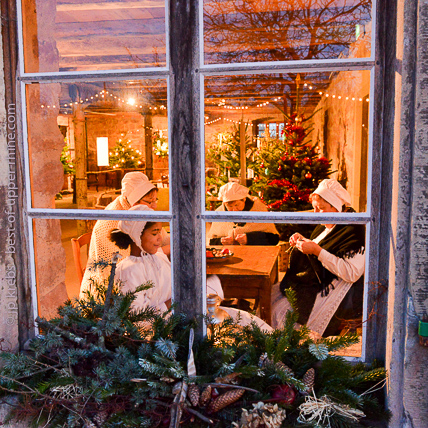 In the evening, the vigil as in old times ...

In the museum, 36 free audio terminals and trilingual (French, German, English) used to learn about the history and characteristics of houses.
Click here for the article on my blog with many photos of ambiance: Christmas as in old times at the living Museum of Alsace (sorry in French only for the moment).

Ecomusee d'Alsace - Chemin du Grosswald, Ungersheim 68190 - tel +33 389744474
The Alsace Ecomuseum is open from 19 March to 2 November 2016 (main season) from November 26 to January 1, 2017 (Christmas season).
Here is the link to access the website of the living open air Museum of Alsace and know the opening hours and the exact program of all events and events throughout the year. 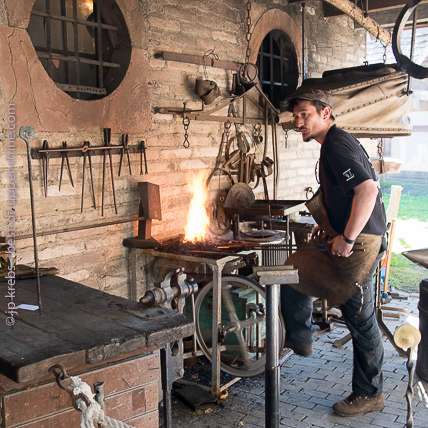 Blacksmith working as in old times. 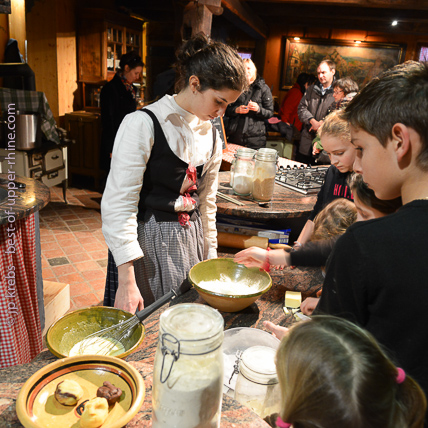 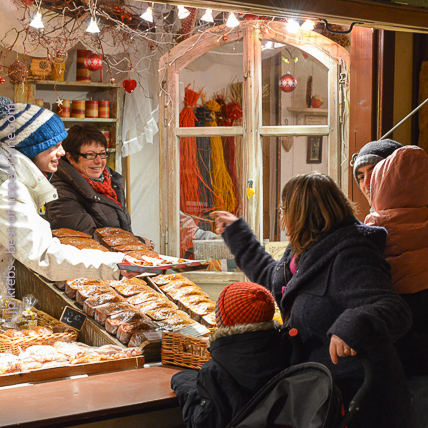 This year 2016, most of the Christmas markets start on Nov 25 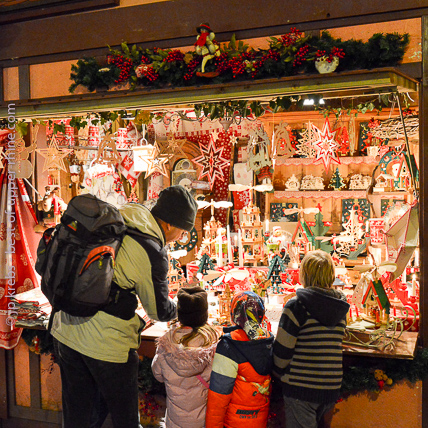 The whole family loves it and has a good time.